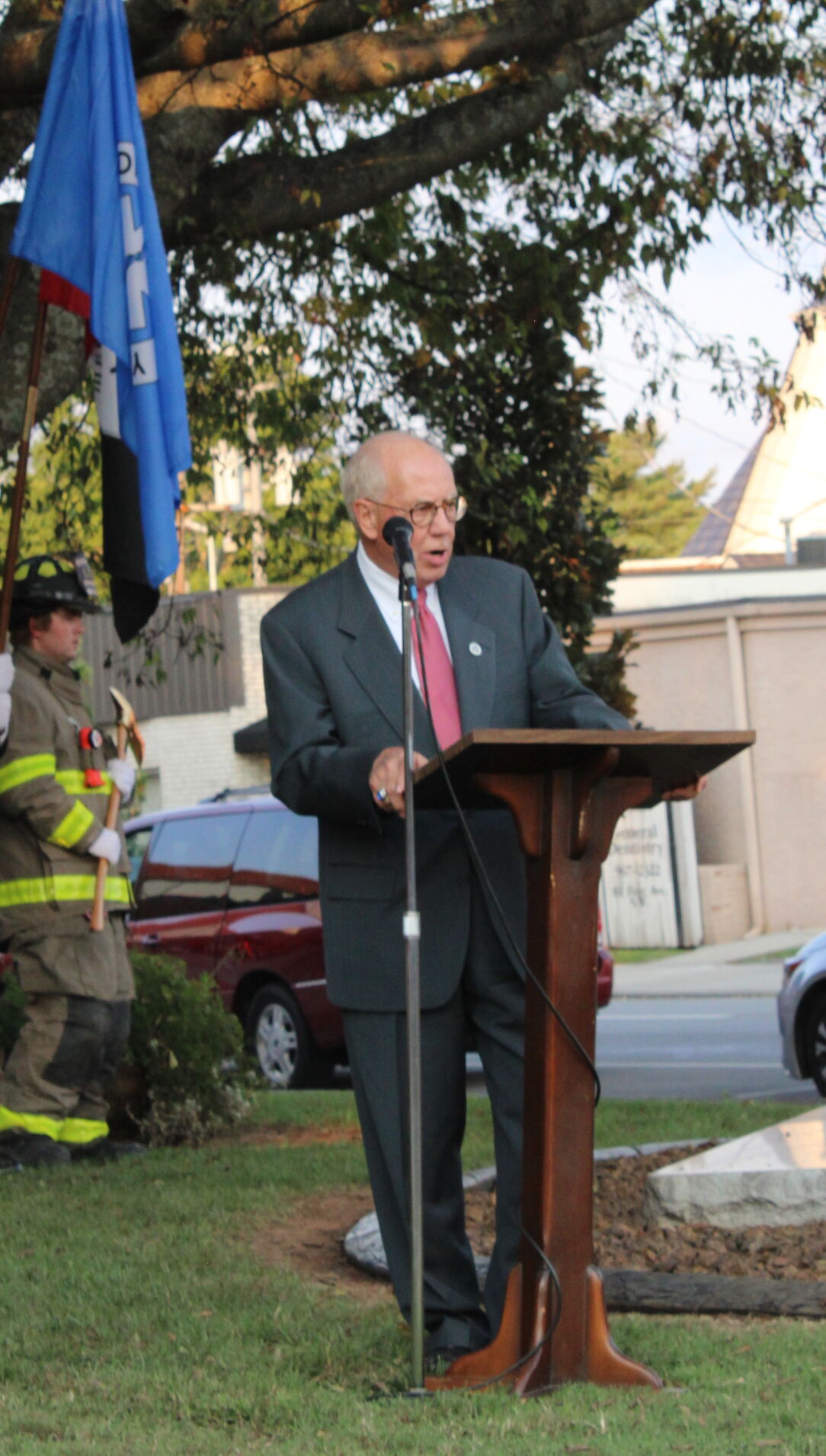 Commissioner Jeff Long of the Tennessee Department of Safety addresses an audience Friday during Franklin County’s annual 9/11 memorial tribute. This year’s event was special because it marked the 20th anniversary of the Sept. 11, 2001, terrorist attacks on the nation. 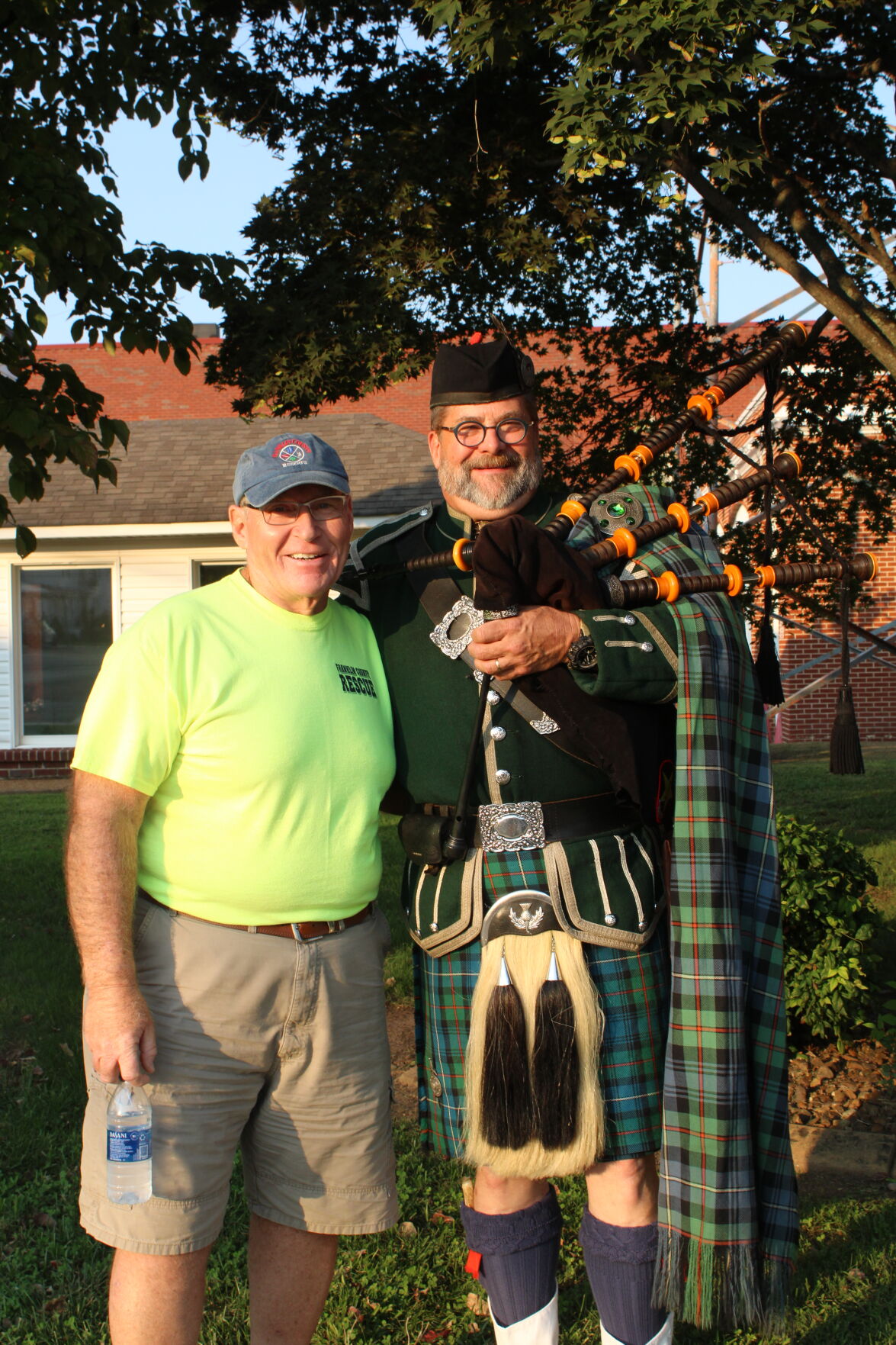 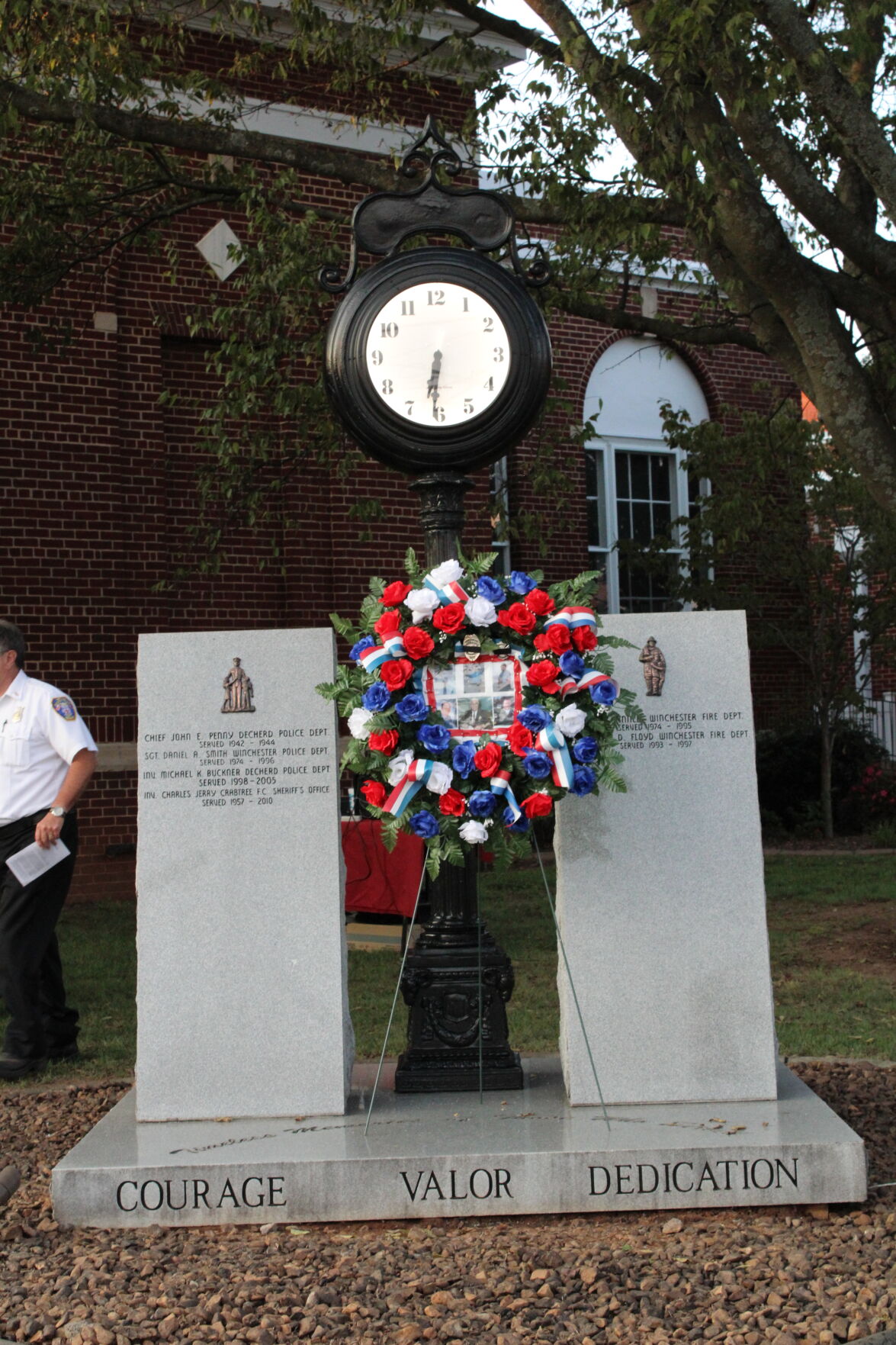 A memorial to Franklin County first responders who have fallen in the line of duty is decorated with a special wreath.

Coinciding with the 20-year anniversary of the Sept. 11, 2001, terrorist attacks on the nation, Franklin County held its annual 9/11 memorial service outside of Winchester City Hall on Friday evening.

Residents gathered to remember the lives lost during 9/11 and to honor fallen police officers and firefighters.

The ceremony opened with a performance of the national anthem by Kaleah Keen and an opening prayer by Daniel Meaker of the Decherd Fire Department. The pledge of allegiance followed, led by Steve Macon of the AEDC Fire Department.

The event was highlighted by posting a special wreath, and guest speaker Long was introduced by Franklin County Sheriff Tim Fuller.

Long extended his appreciation of the event and the dedication law enforcement and emergency personnel have to their profession.

The posting of the wreath was done by Troopers Corey Stuart and Samuel Johnson of the Tennessee Highway Patrol. The posting was accompanied by Todd Boswell on bagpipes.

The ceremony was closed off by a 21-gun salute with closing remarks made by Rudder, who praised the city for the event being a great way to remember the fallen.

Franklin County law enforcement and first responder personnel who have fallen in the line of duty include:

The Franklin County event stems from the Sept. 11, 2001, attacks, also commonly referred to as 9/11, where a series of four coordinated terrorist attacks by the militant Islamic terrorist group al-Qaeda were made against the United States.

Four commercial airliners traveling from the northeastern United States to California were hijacked mid-flight by 19 al-Qaeda terrorists. The hijackers were organized into three groups of five hijackers and one group of four.

Each group had one hijacker who had received flight training and took over control of the aircraft.

Their explicit goal was to crash each plane into a prominent American building, causing mass casualties and partial or complete destruction of the targeted buildings.

The first plane to hit its target was American Airlines Flight 11.

It was flown into the North Tower of the World Trade Center complex in Lower Manhattan at 8:46 a.m.

Both 110-story towers collapsed within an hour and 42 minutes, leading to the collapse of the other World Trade Center structures and significant damage being caused to surrounding buildings.

At 9:37 a.m., it crashed into the west side of the Pentagon (the headquarters of the American military) in Arlington County, Virginia, causing a partial collapse of the building’s side.

The fourth and final flight, United Airlines Flight 93, was flown in the direction of Washington, D.C.

The plane’s passengers attempted to regain control of the aircraft away from the hijackers and ultimately diverted the flight from its intended target.

It crashed into a field near Shanksville, Pennsylvania, at 10:03 a.m. Investigators determined that Flight 93’s target was either the White House or the U.S. Capitol.

The attacks resulted in 2,977 fatalities, more than 25,000 injuries and substantial long-term health consequences, in addition to at least $10 billion in infrastructure and property damage.

It remains the deadliest terrorist attack in human history and the single deadliest incident for firefighters and law enforcement officers in the history of the United States, with 340 and 72 killed, respectively.

Numerous memorials have been constructed, including the National September 11 Memorial & Museum in New York City, the Pentagon Memorial in Arlington County, Virginia, and the Flight 93 National Memorial at the Pennsylvania crash site.

The destruction of the World Trade Center and nearby infrastructure seriously harmed the economy of New York City and created a global economic recession.

Many countries strengthened their anti-terrorism legislation and expanded the powers of law enforcement and intelligence agencies to prevent terrorist attacks.

Many closings, evacuations and cancellations followed, out of respect or fear of further attacks.

Cleanup of the World Trade Center site was completed in May 2002, and the Pentagon was repaired within a year.

The construction of the World Trade Center complex’s replacement began in November 2006, and the building opened in November 2014.