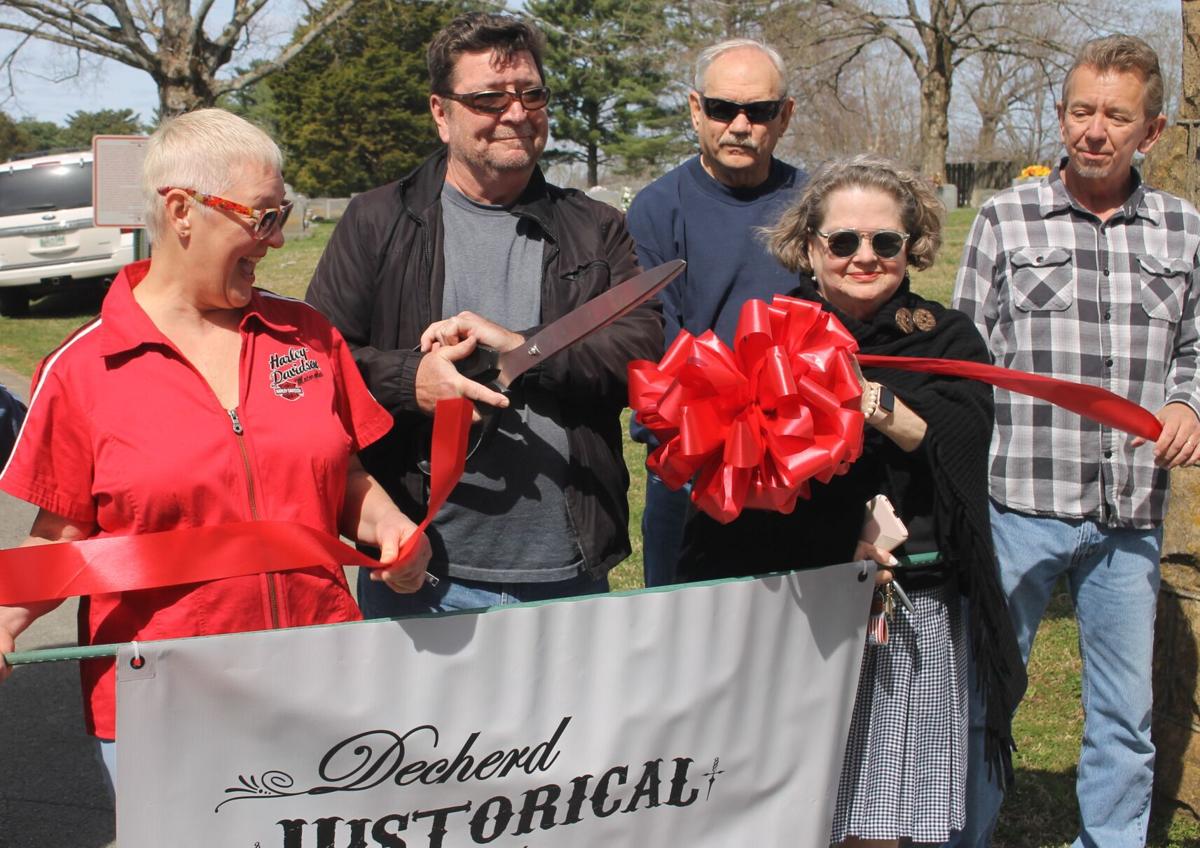 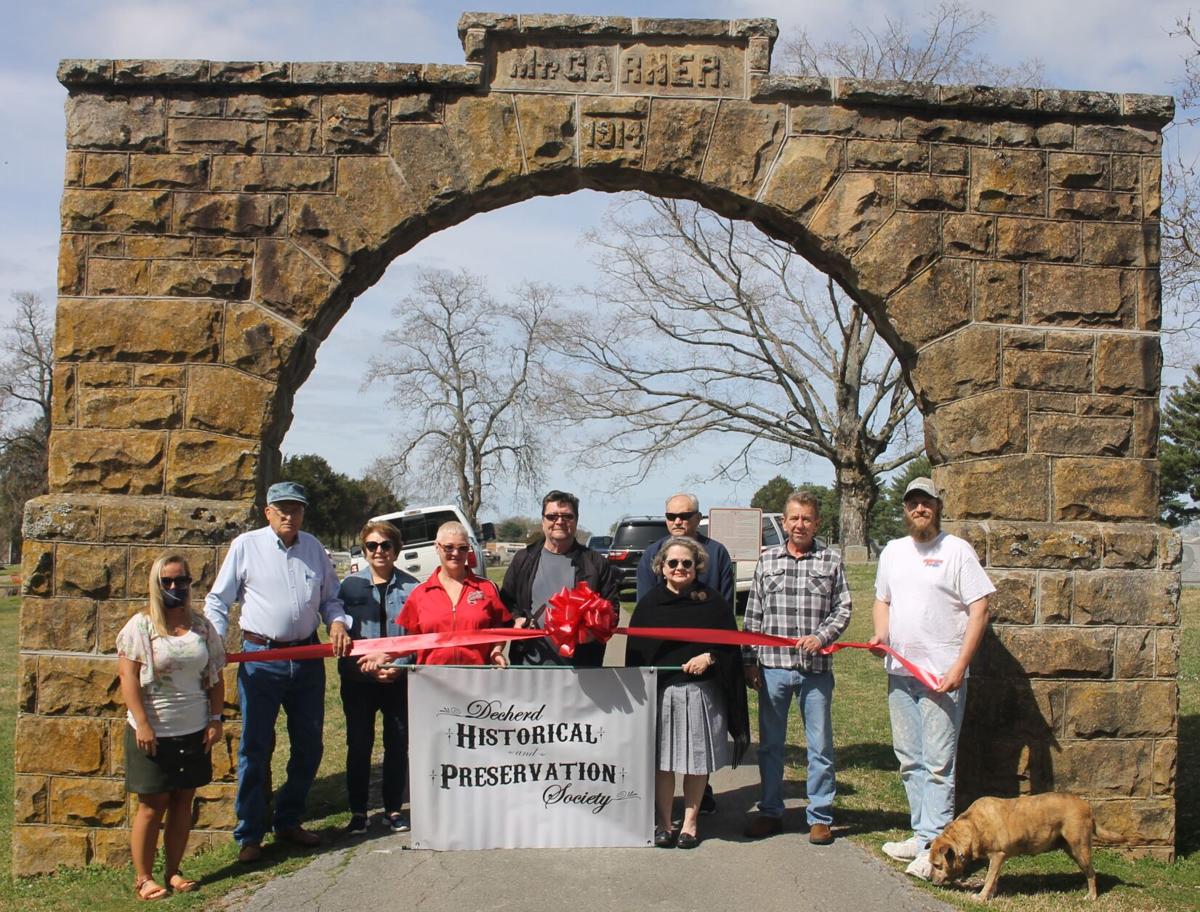 The stone arch at Decherd’s Mt. Garner cemetery has officially been christened.

After more than three years, the stone arch was restored in March, and a special ribbon cutting was held on March 22 to commemorate the milestone.

Mayor Michael Gillespie cut the ribbon signifying the accomplishment with several Decherd residents and Franklin County Chamber of Commerce personnel at hand to witness the occasion.

“It’s beautiful,” Gillespie said, summing up the work that had been done. “It will be here for another 114 years.”

Sewanee-based King’s Masonry & Construction began work on March 2 with the restoration being completed in less than two weeks.

“It feels great,” Gillespie said, referring to reaching what he deems is a major milestone. “I’m very glad the historically significant gateway will be preserved for generations to come.”

Before he became mayor, Gillespie, the Decherd Historical and Preservation Society’s founding member, addressed the Board of Mayor and Aldermen in October 2017 about possibly establishing a funding avenue to restore the stone arch at Mt. Garner Cemetery, adjacent to Ninth Avenue and Shepherd Street.

Gillespie had asked that an account be established to accept donations to reimburse the city for restoring the arch, estimated to cost between $5,000 and $10,000.

However, Robin Smith, who was Decherd’s mayor at the time, had said the process was easier said than done. He added that the city has to keep detailed records and receipts of any public donations, but the process could be worked through by using the city’s Historical Committee to handle the process in accordance with State of Tennessee accounting standards.

However, the donation process did not progress in the way Gillespie had wanted it to.

He said on March 2 that the final bill is expected to be about $7,500, and the city has the money available to pay for the work.

Although the request to fix the arch was made more than three years ago, the project hit some snags along the way.

Gillespie addressed the board in February 2018 and said requests to fix the arch had not been fulfilled.

At the time, he had voiced his concerns for a third time to the board because there had been no progress on the venture.

Gillespie said he wanted to know what would be done with the arch because he kept hearing it would be fixed, but nothing had been done.

City Administrator Rex Clark had said a contractor was ready to do the work but was waiting for better weather to get started.

Smith had said the committees for the town meet on a case-by-case basis.

After the October 2017 dialogue, there was no advising from the committee to the board about the arch repairs because the committee never met.

Decherd Historical Committee Member Andy Groves had said he was asked to be on the committee by the mayor but had not had anything to do with the issue since the initial request was made.

Groves added that nothing had been considered, and there had been no contact after the initial request was made to fix the arch.

Another committee member, Mary N. Hess, who was also on the Cemetery Committee and Planning and Zoning Board, said the committee had never met about fixing the arch.

Hess had said she thought the Cemetery Committee would have taken the lead in the repair process instead of the Historical Committee because the arch is located in the cemetery.

Hess said that during previous Mayor Betty Don Henshaw’s tenure, the Cemetery Committee met regularly but had not done so since.

She said she was told that the chairmen of the committees called the meetings when they were requested by Smith.

Gillespie said he was frustrated with the lack of action toward the arch which prompted him to run for mayor against Smith, and he later defeated the incumbent.

Gillespie said on March 2 that the arch had been a priority, but the city became tied up with issues related to the COVID-19 pandemic which delayed moving forward to repair it.

He said now is the time to fix it.

Gillespie had said that the arch, built in 1914, needed to be repaired because a cable that keeps it in place had been worn down due to the weather.

“It’s a safety hazard that the arch is hooked up by a cable,” he had said. “There’s only two options for the arch — either tear it down or fix it.”

Gillespie said that tearing the arch down would be a negative mark on the city’s history.

The society’s mission statement, drafted by Gillespie, says the organization wants to preserve all of Decherd’s significant historical artifacts, and the Mt. Garner arch is first on the list.

Gillespie said on March 2 that King’s Masonry was selected because it has extensive experience in handling stone work at the University of the South at Sewanee, which features multiple structures made out of stone.

“They came highly recommended,” he said, referring to King’s.