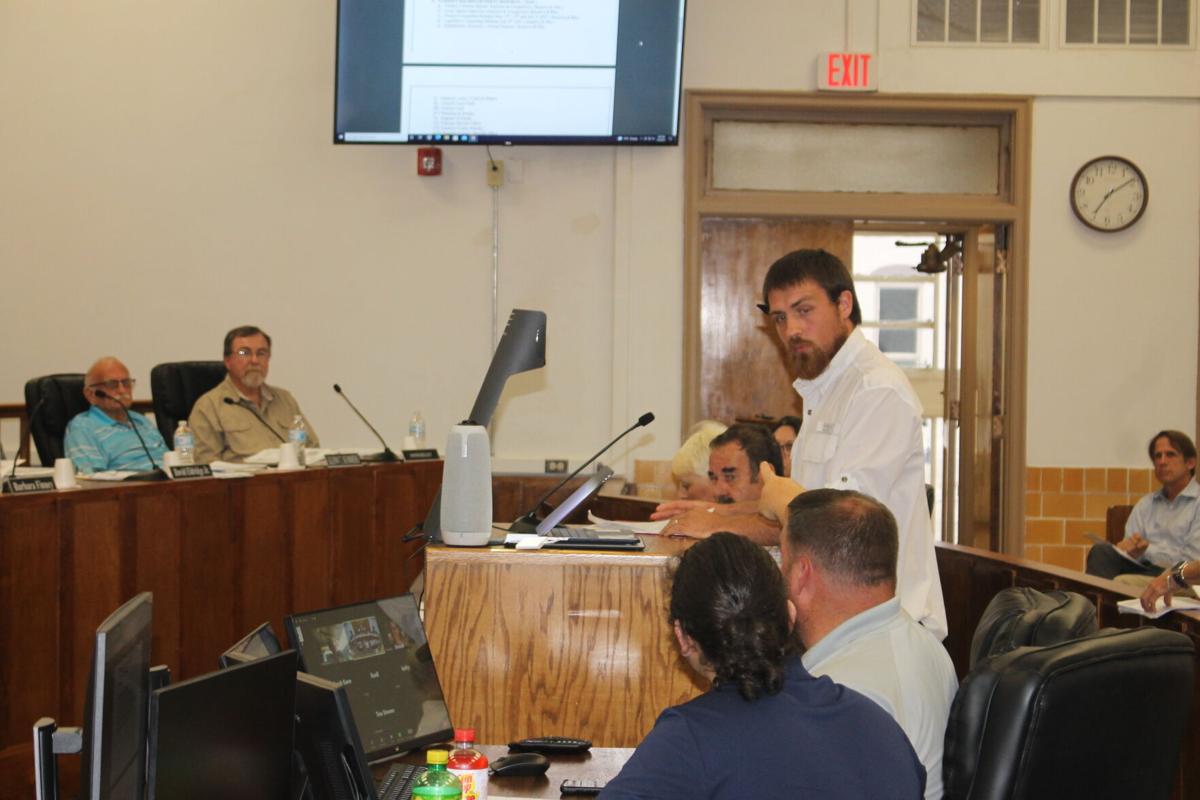 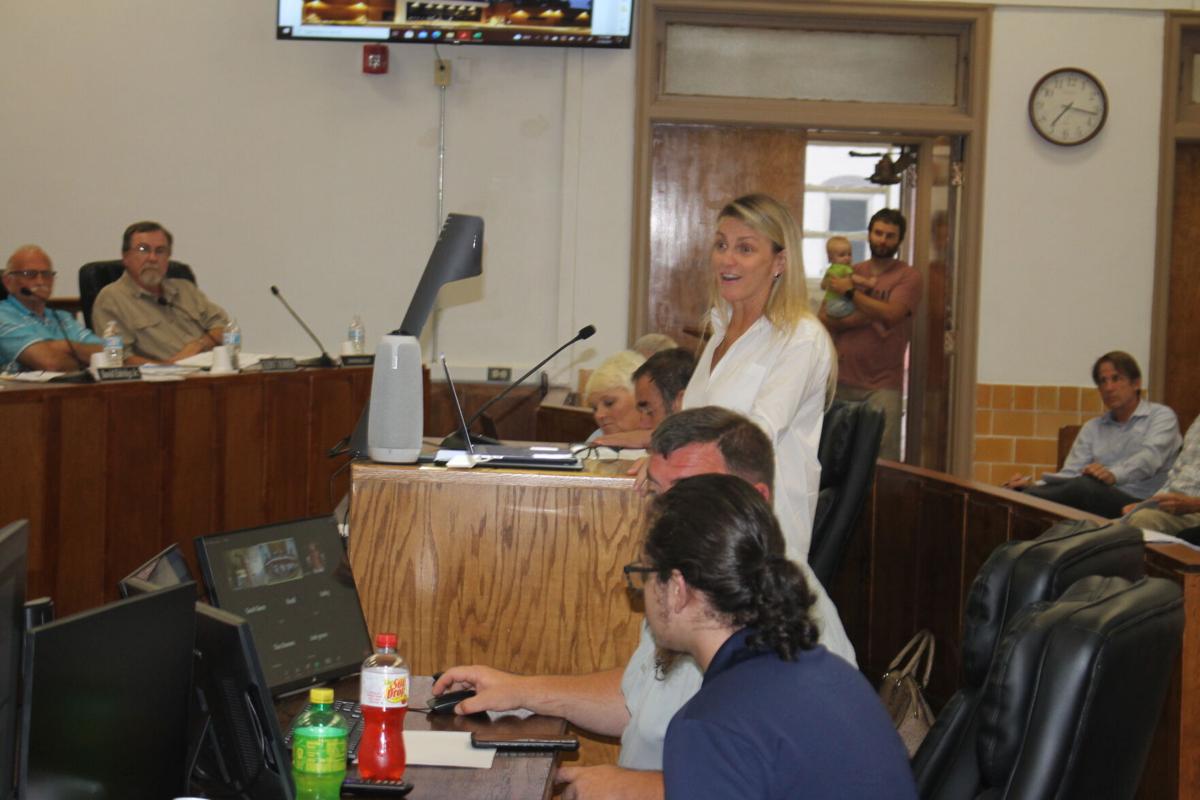 Catherine Cavagnaro, who is the Franklin County/Sewanee Airport’s interim manager and operates Ace Aerobatic School there, provides a detailed report to the County Commission on how the airport has spawned students who learned to fly there into aviation careers. 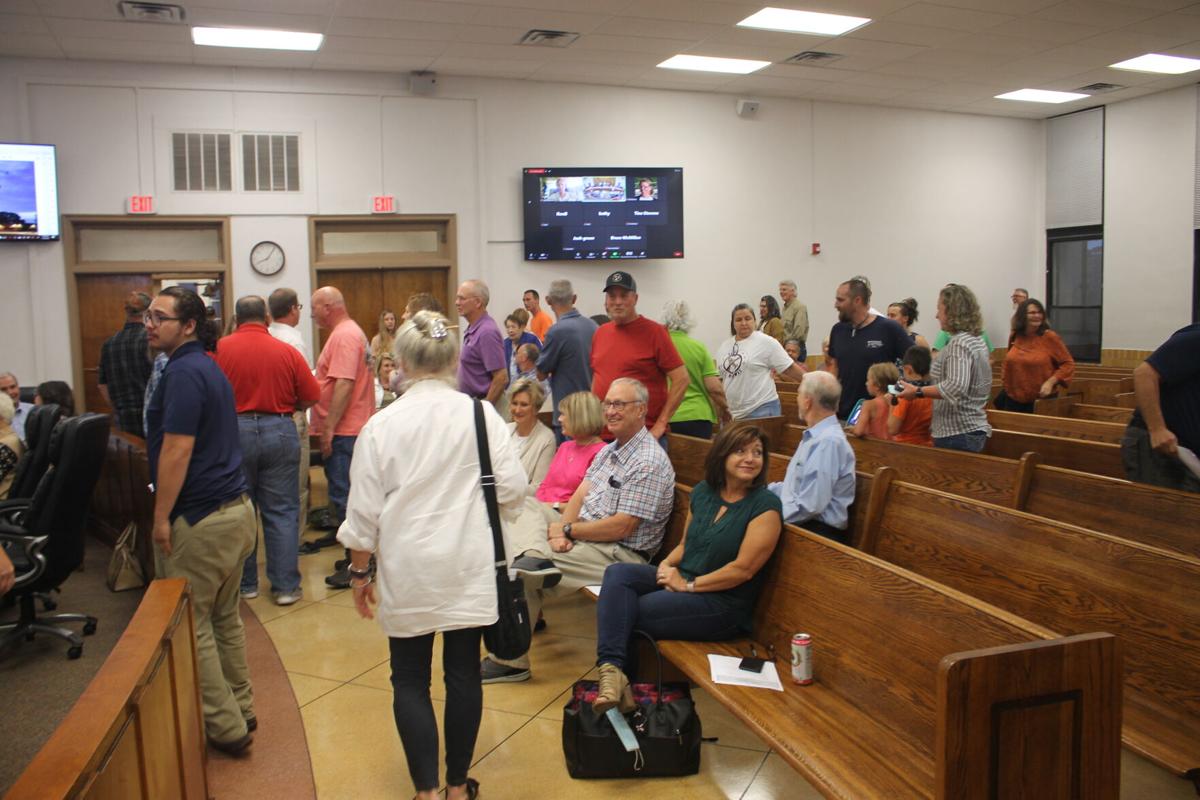 An audience of mostly Midway Road area residents from Sewanee exits the Franklin County Commission’s chambers at the Courthouse Monday after cheering when the commission approved to form a special committee to oversee the Franklin County/Sewanee Airport’s operations.

The Legislative Committee approved on July 6 to forward a resolution for the commission to consider that specifies two Midway area residents be on the seven-member committee.

Commissioner Johnny Hughes, who holds the Fifth District, Seat A position at Sewanee, named Matt Hughes and Kevin Gilliam from Midway to serve on the committee.

Most in the audience of about 75 were from the Midway area and cheered when the commission approved to form the committee.

Matt Hughes, no relation to Johnny Hughes, addressed the commission and said the resolution should include requiring the University of the South, which operates the airport, to:

• Discuss any plans for budget or growth-expansion of the airport with the committee.

• Require the university to comply with the airport committee. If it doesn’t, the County Commission would reserve the right not to pursue any further grants until requested budget information is received.

However, County Mayor David Alexander said the matter at hand is forming the airport committee which could later adopt Matt Hughes’ suggestions, and the resolution was approved by the commission with no further revisions from the Legislative Committee’s draft.

Forming the committee has been the key topic during several recent meetings because Midway area residents have stated they have issues with how the airport is managed and how it operates.

The residents have said they fear a move could be made to use eminent domain to increase the airport’s size to where it could accommodate business-jet-sized aircraft, and they don’t want their property and ownership rights infringed upon.

Several of the residents at a May 3 meeting said they would like an airport authority to be formed so that citizen input will be heard involving issues related to the airport.

The main issue has been to cut the trees near the runway to comply with Tennessee Department of Transportation safety regulations by reducing their height to clear the flight path.

Doug Williams, University of the South treasurer, told the commission that the airport needs to meet TDOT standards, and the state agency desires a permanent easement to ensure the trees can be cut anytime necessary without having to get repeated permission from the landowners.

A controversy developed when surveyors had gone on Jerry Jacobs and Jerry Mansfield’s property recently to survey for the easements without them having prior knowledge.

Commissioner Greg King asked why there would have to be an easement if the property owners voluntarily cut the trees.

Williams said the university was following TDOT’s recommendation to garner the easements because it is an approach used at most airports and ensures flight paths will remain clear.

Commissioner Adam Casey said the university also has trees on its side, and clearing the trees should be a joint effort with the property owners and the university’s trees being cut simultaneously.

Alexander said such details could be worked through and agreed to by the airport committee.

Initially, Alexander, Johnny Hughes and Fifth District, Seat B Commissioner Helen Stapleton agreed the committee should include two county commissioners — one from District 5, two University of the South representatives and two private citizens.

However, the Legislative Committee amended the resolution to specify the private citizens on it specifically be from Midway.

The resolution says that the Midway residents cannot be contracted by the airport or employed by it or have business with or at the airport. It adds that they cannot have anything to do with overseeing or managing the daily airport operations and cannot be employed by The University of the South.

The resolution says the Franklin County mayor or an appointee shall serve as chairman.

The committee members shall serve four-year terms, and the non-University of the South members shall be chosen by the Franklin County mayor in consultation with Sewanee area residents and shall be approved by the County Commission.

Alexander told Johnny Hughes that he could select the two Midway area residents, and he did during a break in Monday’s meeting.

Alexander said the airport committee’s first meeting will be at 6 p.m. on Aug. 2 at the Franklin County Annex building.

Matt Hughes had told the commission at a recent meeting that, although it’s a county airport, the University of the South has been reluctant to release any budget information about the airport’s funding and where the money actually goes.

He said it had been more than a month since he made a request for budget documents but had heard nothing from the university.

County officials were supplied with budget information for the airport, but County Commissioner Greg King said it was unacceptable.

“This budget they sent us is a joke,” he told the Legislative Committee.

Williams said the university had an airport management company handling the operations.

He said the university paid $25,000 up front, and the company received additional income from hanger rent, which is why that wasn’t listed in the budget information.

He also said that the airport’s fuel tanks were in disrepair, and several recent years were without fuel sales.

Casey asked why the tanks weren’t replaced since they are above ground, which costs less than more permanent installations.

Williams said the cost was associated with the type of tanks TDOT requires.

Casey said the problem Midway residents have had with the airport and the university comes down to “transparency. … These people want to know what’s going on.”

Catherine Cavagnaro, who is the airport’s interim manager and operates Ace Aerobatic School there, provided a detailed report on how the airport has spawned students who learned to fly there into aviation careers.

She said the University of the South is the only university in the country with its own airport.

King said the airport does not belong to the university, it belongs to Franklin County taxpayers.

Cavagnaro explained she is new to the position, and corrected her statement to say that the university is the only one in the country to operate an airport.