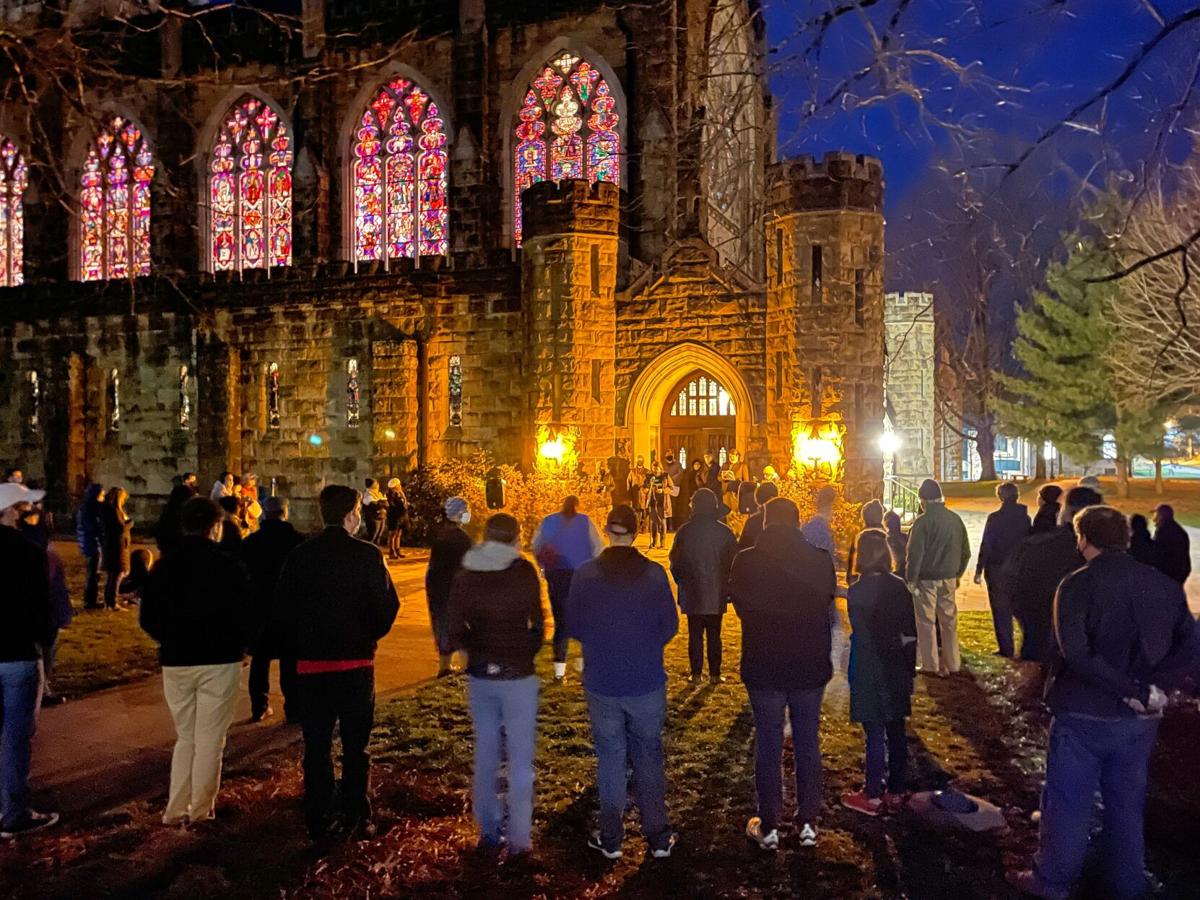 School of Theology community members at the University of the South gather Friday evening to draw attention to recent racial incidents that have impacted the Sewanee campus.

Sewanee students march in protest on March 15 in response to racism displayed by some University of the South students at a March 13 lacrosse game.

Members of the School of Theology community at the University of the South held a prayer vigil on Friday evening as response to the racial incidents that have taken place recently on the campus by some undergraduate students.

An incident involving hate speech occurred on March 13 during a men’s lacrosse game on the Sewanee campus.

Prior to that, Vice-Chancellor Reuben Brigety’s home was vandalized, and there were acts of intimidation that were directed toward him and his family.

The vigil was organized by the Student Diversity and Reconciliation Committee along with the support of the other student committees of the School of Theology. It is the mission of this committee to lead the community in discussions around a range of critical social issues, such as race, racism and discrimination based on gender, age, class, sexual orientation, ethnicity and disability.

At 7 p.m., the group gathered at the school’s Chapel of the Apostles where each attendee was given a candle to begin their walk to the main quad on the University campus. After the group of about 160 people arrived on the quad, the seminarians led them in a prayer of lamentation.

“A lamentation is an underused practice,” explained Yuriria Rodriguez, co-chair of the diversity committee. “To lament is to cry out to God, acknowledging the trouble that besets us on all sides.

“It is to acknowledge the pain, the heartbreak, the anger, the confusion and the frustration that we feel. It is often a cathartic experience, expressing aloud those things that God already knows are living in our hearts.”

When asked what the group wished to accomplish with the show of solidarity, Rodriguez said: “Our imminent hope is to bring our community together. We want to raise our collective voice to inspire people to get involved in the hard work of dismantling systems of division, hate and oppression. There is a lot of work to do to bring about the change we need, to bring about the beloved community we ought to be, but we need to do it together, as a community.”

Further information is available at https://theology.sewanee.edu/current-students/student-committees/diversity-and-reconciliation-committee/.

Officials at The University of the South are investigating after Sewanee students hurled racial epithets at a visiting lacrosse team during a March 13 game.

According to the school’s vice-chancellor and president, Reuben E. Brigety II, some students at the university who were attending the match used “the most vile racial epithets,” including the “N-word,” toward the players of the visiting team, Emmanuel College, a private, Christian, liberal arts school in Franklin Springs, Georgia.

Game officials stopped play during the third quarter to clear the stadium of the offending students.

According to Brigety, the school is operating under certain COVID-19-related protocols, including limited capacity at sporting events.

Per the protocols, the only people who were allowed to attend the game were the student-athletes, coaches, game management staff and students.

Brigety said about 120 students attended the match between the Sewanee Tigers and Emmanuel College.

“To our great dismay, a few of the Sewanee students hurled the most vile racial epithets toward members of the visiting Emmanuel team, whose roster includes white, African American, Asian American, Native American and Latino men,” Brigety said in a statement. “So pronounced were the shouted slurs in the third quarter that the game officials on the field ordered that Sewanee fans be cleared before play could continue.”

According to a statement from J.E. Bert Severns, the coach of the Emmanuel lacrosse team, when he and his players became aware of the utterances, he “immediately walked out on the field and told officials that the game needed to be stopped to address the racial epithets being used by the spectators.”

The officials then brought the players off the field, spoke to the Sewanee coaches and informed them of the situation, Severns said.

“The Sewanee administration took the appropriate step of removing all of the spectators from the stadium,” Severns said in his statement. “Once that was done, we were able to resume play and finish the game.”

Brigety was not at the match in question but said Athletic Director Mark Webb informed him of the incident shortly after the game concluded.

“Upon hearing the disturbing news, I went to the lacrosse field to meet with the visiting team,” Brigety said. At that time, he said he personally apologized to the guests for the students’ conduct and told them Sewanee “does not tolerate such behavior, and that we considered the assaults on their dignity completely unacceptable.”

Additionally, Brigety said, the athletics staff, including Webb and the coaches, apologized to the Emmanuel staff.

“We are proud of that, and we believe that makes us better,” he said. “I have had many conversations with our players to make sure that what they experienced is wrong and absolutely unacceptable.

“I will continue to have these conversations with them. Emmanuel College is supporting them, and the entire lacrosse community has reached out to let them know that they have their backs.

“Our players are resilient, but they are human, and that experience takes its toll.”

Following the incident, the Sewanee Athletics Department released a statement echoing that of Brigety’s — condemning the behavior of those who used the racial epithets.

“We have joined Vice-Chancellor Brigety and our lacrosse coaches and student-athletes in personally conveying our apologies to Emmanuel College and its student-athletes, staff and coaches,” the statement said.

According to Brigety, Webb has initiated a comprehensive review of what happened “to identify steps Sewanee Athletics can take in its game protocols to help prevent such incidents in the future.”

It will include changes in the positioning of Sewanee staff and security so they can “stay attuned to fan behavior more fully” than they were at the March 13 game and are “empowered to act to stop such behavior should that be necessary.”

Webb will also be meeting with students and student-athlete groups, including the Student-Athlete Advisory Committee, to reassert the values of the school and convey the school’s unequivocal commitment to treating everyone, including visiting athletes, respectfully.

Additionally, Brigety said in the statement, the school is also “determined to identify those who were responsible for yesterday’s hate speech so that appropriate measures can be taken.”

Initial efforts to figure out which students were responsible for the epithets proved “unsuccessful,” Brigety said. To that end, he gave the students until the afternoon of March 15 to turn themselves in.

Whether those students did by the deadline was unclear.

A call to the Dean of Students office returned a response of “no information to release.”

The statement from the athletics department also called for those responsible to turn themselves in through the confidential reporting form on the school’s LiveSafe app, which is available to all students.

“This behavior does not reflect the values of our University and our athletics department, and it will not be tolerated at Sewanee,” the statement read.

Brigety said the actions of those students during the match were a “blatant violation of our collective commitment” to the university’s motto for living in community.

“They were even more egregious because they were directed at guests whom we had invited into our community to compete against our student-athletes,” Brigety said. “Though these horrible racial insults were shouted by only a few of our students, how we respond is a reflection on our collective integrity and honor.

“I therefore must ask anyone in the Sewanee community who may know the identities of the individuals who shouted these racist epithets to get in touch with the University.”

Brigety also offered students who may need support in coping with the “unsettling incident” on the campus to contact the school’s counseling and psychological services, the Dean of Students office or the interim director of multicultural affairs, Rachel Fredericks.

“What happened at Sewanee on Saturday should never happen in any place or sporting event,” Severns said. “I hope I never see anything like that again, and I believe President Brigety will ensure that it is not repeated at Sewanee.”

Sewanee students also expressed their outrage at the incident on March 15, staging a full campus walk-out at 10:30 a.m.

Hundreds of students walked out of their classes, demonstrating against the racism displayed by the anonymous students over the weekend.

According to The Sewanee Purple, the student newspaper on campus, social media posts spread quickly informing students, faculty and staff of the demonstration.

“WALK OUT OF CLASS. MEET ON THE QUAD. NO ROOM FOR RACISTS,” the posts read.

Bigety himself took part in the demonstration, addressing students that morning.

“Believe me when I tell you that literally what we do in this moment, over the course of the next several hours, will define this university for a generation,” he said to the crowd.

He then thanked those in attendance for “choosing to stand here today against unspeakable and intolerable acts of racism by some of our students, against what we invited to our domain.”

He also shared his pride for the students who came to the demonstration and shared their own experiences of racism.