The new Food City supermarket at 2211 Cowan Highway will be opening soon, but delays in getting equipment supplies have pushed the opening date past its June 23 target. However, the store’s appearance is near what its final state will be. 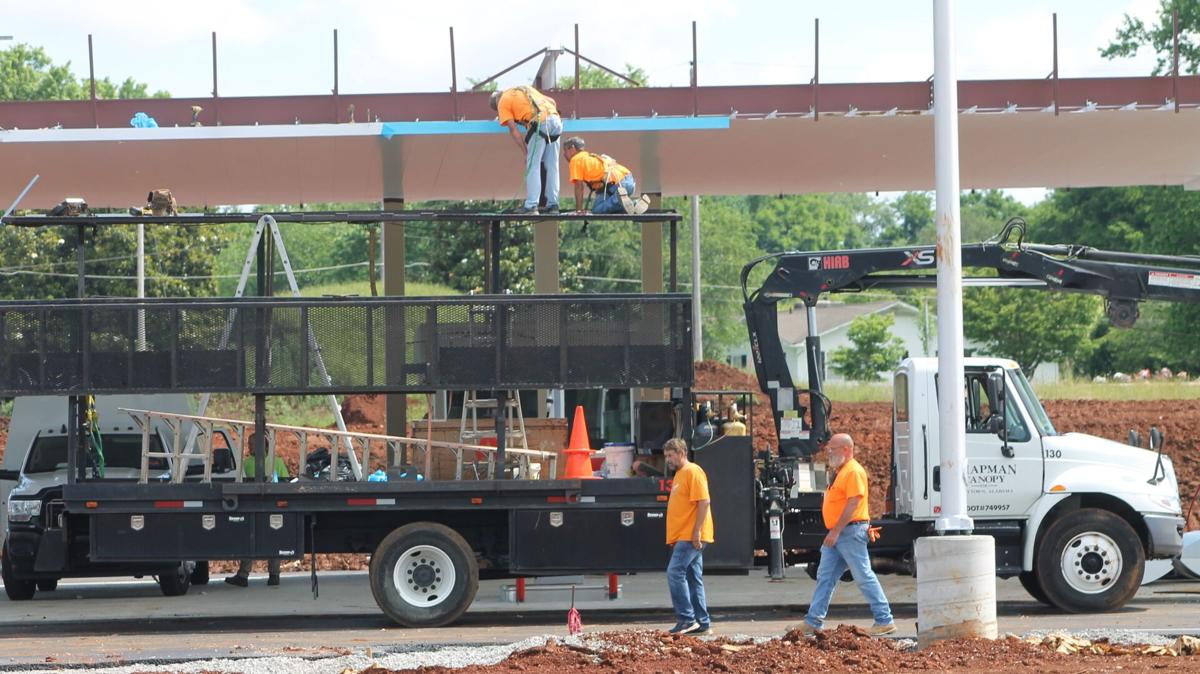 Contractors work on Food City’s Gas ‘N Go fuel station which is one of the supermarket’s amenities. Other offerings include a pharmacy, a floral department, a Starbucks coffee shop, a restaurant with a salad bar and state-of-the-art grocery offerings, including fresh seafood.

Steve Smith, Food City CEO and president, said Monday that the large supermarket on the city’s south side can’t open without its produce and meat department areas having sinks and related steel-coupling items to sanitize equipment used to prepare food products to sell. He added that proper sinks are required to pass Health Department inspections.

Smith said Food City, like other operations, has faced shortages due to circumstances stemming from the COVID-19 pandemic. He added that initially the shortages involved products such as toilet paper, hand sanitizer and pet food.

“Now it’s on the supply side,” he said, referring to getting equipment necessary to open the Winchester store.

Smith said the goal is to have the store, located on a 12-acre construction site at 2211 Cowan Highway, open by the end of June or in early July.

“Our goal is to have the Food City store in Winchester opened no later than the end of June, but getting the equipment needed could still be delayed, and then it could be in early July,” Smith said, adding that he hopes it will be no later than that.

Either way, he said Food City is excited to have the store in Winchester.

“It’s a big deal for us,” Smith said. “This will be the farthest western store we have in Tennessee.”

He said the Winchester supermarket will operate under the Chattanooga division’s umbrella.

Smith said that although the store is not open, its employees are being trained and have been preparing for opening day.

“We’re glad to have such a good workforce,” he said, adding that some positions remain to be filled, and clerks are being hired.

Ground was broken to begin construction on the 54,000-square-foot facility in late November 2020.

“We are so excited to be here in Franklin County and Winchester,” he said, addressing an audience of about 35 just before the groundbreaking.

Smith had said it was a landmark day for his company, and Food City has had a great partnership with Winchester city officials in having the project go as smooth as possible thus far.

Mike Bunch, who owns the Morristown-based Michael Bunch Development, which is developing the supermarket, said he has been involved in building five large-scale Food City stores, and Winchester’s had been the smoothest one he’s worked on.

Bunch paid tribute to City Administrator Beth Rhoton and Community Development Coordinator Pat Sanders for streamlining the process so that all the pieces of the project could fall together so nicely.

“This has been the best one I’ve worked on so far,” Bunch said. “I’m very appreciative of what they’ve done here to make it go so smoothly.”

Smith said the supermarket will include a pharmacy, a floral department, a Starbucks coffee shop, a restaurant with a salad bar and state-of-the-art grocery offerings, including fresh seafood.

He added that the development also includes a Gas ‘N Go fuel station.

He said Food City stresses energy efficiency with the most modern LED lighting leading to a 40 percent utility savings that has been passed on to customers.

Smith said Food City’s roots date back to 1955, and it is a three-generation-old family business with 17,000 employees in Georgia, Kentucky, Tennessee and Virginia with an expansion planned into Alabama. The company has more than 130 stores.

“We look forward to opening this store,” Smith said.

He highlighted the company’s profit-sharing plan for employees and said Food City’s youngest employees are 14 years old and many develop careers with the company.

Winchester Mayor Terry Harrell had said Winchester has been in need of a supermarket on its south side since the Food Lion store closed several years back.

He added that Rhoton began working toward getting a replacement supermarket just after Food Lion closed, and said she has been diligent and instrumental in securing the new Food City store.

In addition to Rhoton, Harrell paid tribute to the Winchester City Council, the Winchester Industrial Development Board, the Franklin County Commission, County Mayor David Alexander and State Sen. Bowling for doing their parts to secure the store.

Harrell referred to the movie “Field of Dreams” with its catchphrase — “If you build it, they will come.”

He said that with the Food City being built, other development is sure to follow.

Bunch said the site has the potential to accommodate up to six businesses, and plans are to add adjacent lodging and restaurant facilities in the future.

Many Food City grocery stores have their own fuel stations with the Gas ‘N Go branding.

In July 2015, Food City announced the purchase of 21 BI-LO locations in the Chattanooga market as well as eight BI-LO stores in northern Georgia from Southeastern Grocers.

The company plans to invest over $40 million in capital improvements to the locations during the first year as well as install Gas ‘N Go fuel stations in as many locations as possible, according to corporate information.

The Winchester City Council approved a payment-in-lieu-of-taxes resolution on June 9, 2020, which put the city a step closer to attracting Food City.

Payment in lieu of taxes, referred to by the acronym PILOT, is a tax incentive to attract businesses and industry in highly competitive markets with other cities and counties.

The PILOT program Winchester approved involves having the retailer pay nothing in property taxes the first three years, then 50 percent in the fourth year, 75 percent in the fifth and full taxes from the sixth year onward.

The resolution delegates authority to a recently formed Industrial Development Board to handle the PILOT incentive.