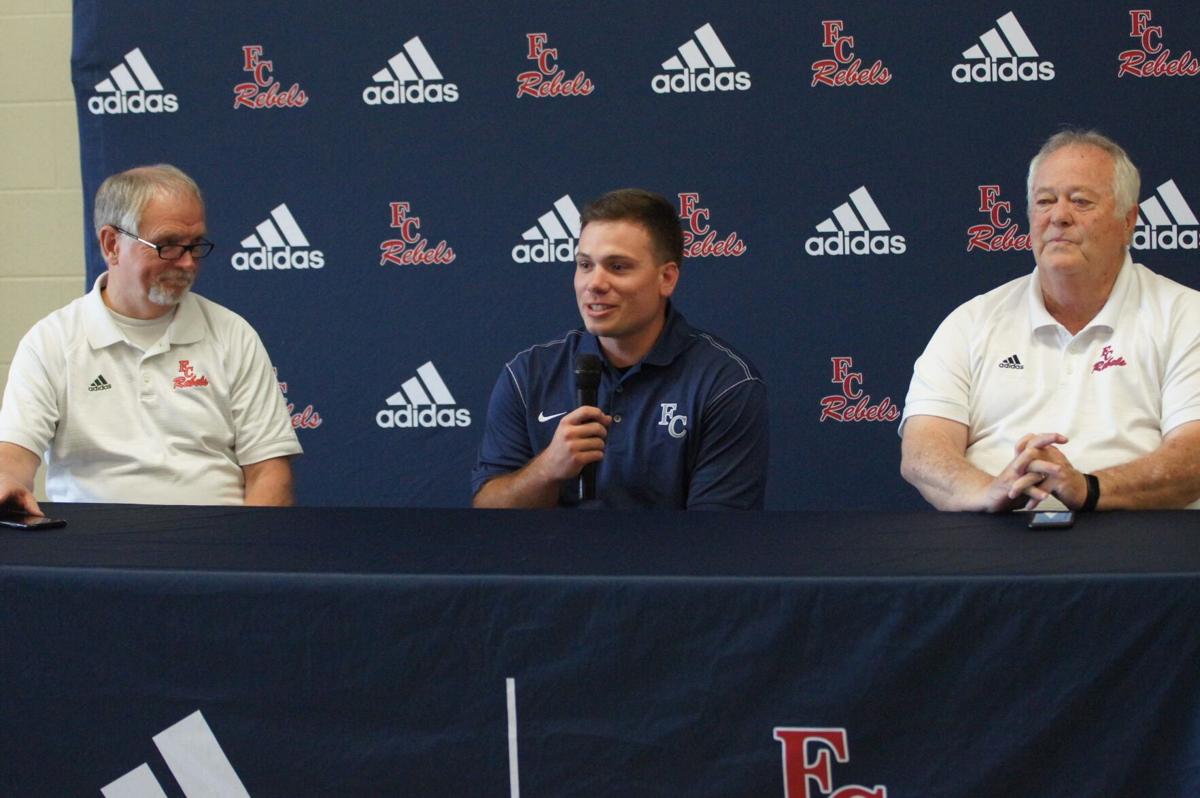 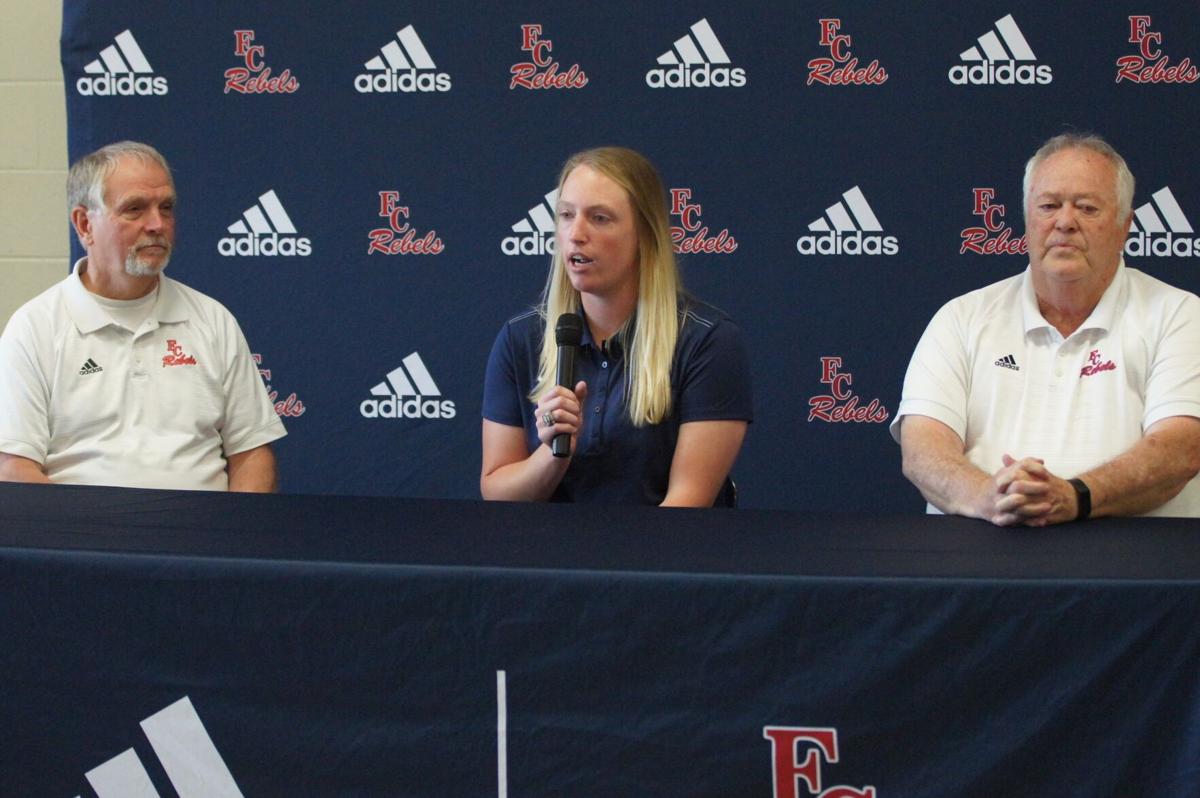 Kelly Kennedy and Samuel Tarlton were officially introduced in their new roles as Franklin County High School’s head softball and boys basketball coaches, respectively, in a press conference at the high school Thursday.

Kennedy was the first to be introduced as she will be taking over the softball program at FCHS after serving as the head softball coach at Grundy County High School for the past two seasons.

“I’m just looking for an opportunity here at Franklin County, and we’re excited to get going,” Kennedy said to open the press conference.

Kennedy said that one of her goals as a coach is to help the athletes’ development both on and off the field.

Kennedy has spent some time working with the team since being named to the position on May 12 with tryouts being held for the program this past week. She said that she has been impressed with the willingness of the players to work hard.

“This is a bigger school district than what I’m used to so we have a little bit more pull when it comes to the talent pool. Overall, the kids just look like they want to be out there,” she said. “They want to be here, they want to be working hard and they want to win. As a coach, that’s very exciting. You can’t teach the heart. When you have kids that have heart, it makes it a lot easier to do my job.”

Kennedy said that the team will be hard at work for the rest of the month until the Tennessee Secondary School Athletic Association’s dead period starts on June 28.

“Just getting the girls used to me and the way I run my practices is our biggest goal for this summer. That way, when we turn over into spring team practices, we’re ready to go,” she said. “I don’t have to teach them the stuff that I want them to know because they’ll already know it.”

Kennedy said that there are several multi-sport athletes on the softball roster, which is a net positive for their development as players.

“Cross-training is a really important part of sports overall. Just because they’re not necessarily working on hitting or throwing when they’re with coach (Amber) Gilliam in basketball doesn’t mean that it’s not translating into some sort of skill for softball,” Kennedy said. “The conditioning is a huge aspect. They need to be well-conditioned, they need to be prepared for a long game, and the conditioning that they’ll get in other sports will absolutely translate into success for softball as well.”

FCHS Athletic Director Don Rhoton said that he was very impressed by the knowledge that Kennedy brought to the table in the hiring process.

“This is the one sport that I felt comfortable talking about philosophy and fundamentals. I was really impressed,” Rhoton said. “We talked about the fielding and the hitting and everything like that. Her grasp of that knowledge and the way that she was going to teach it was very impressive.”

Kennedy closed her portion of the press conference by reiterating her and her team’s excitement for the upcoming year.

Tarlton spoke next as he was officially named the new head coach of the FCHS boys basketball program on Wednesday after previously leading North Greene High School to three district championships, two regional titles and two appearances in the state tournament over the span of four seasons.

“I’m very excited about this opportunity at Franklin County,” Tarlton said. “Most people ask me why leave (North Greene) when you’ve had so much success. I’m up for a new challenge. I think it’s time to step outside of my comfort zone at a bigger level.”

FCHS Principal Dr. Roger Alsup said that Tarlton turned in the best resume of the applicants for the position with his record of 107-36 at North Greene speaking for itself.

“He’s been in those high-pressure games, and he’s a winner,” Dr. Alsup said. “Just talking to him, you know that winning is important, but we’ve also talked about the importance of taking care of the kids and doing the right thing with our students.”

Tarlton said his primary goal early on is to build relationships with his players, who he met for the first time earlier in the day prior to the press conference.

“Before anything X’s-and-O’s-wise, I think you’ve got to get a really good relationship with the kids. I think that’s probably my No. 1 strength, my relationship with my players. We’re going to come in and try to get our core values and standards set,” Tarlton said.

Tarlton said he is also going to be working on developing relationships with local middle school and AAU basketball teams to establish links with players before they reach the high school.

“I think it’s hard to take a kid and teach them everything they need to know from freshman to senior year. If you get them in fifth and sixth grade, then they work a little bit as they go up,” Tarlton said. “I think that’s how you build a successful program.”

Tarlton said he has been busy reviewing game footage of the basketball Rebels from the 2020-21 season, and he said he thinks that the team could be competitive in their district. He added that one of his goals for the summer will be to work on developing individual skills and fundamentals so that the players can function better as a unit.

“It really doesn’t matter what your plans are or how you do them as a team if you’re not skilled enough to do them,” Tarlton said. “Especially during the summer, we like to get in and really hone in on the individual skills and fundamentals. The better they are individually, the better off they’re going to be as a team.”

Dr. Alsup closed the press conference by referring to the early interest expressed by players after meeting Tarlton for the first time.

“Just watching him interacting with the students, you can tell they’re going to play hard for him. They’re going to respond to Sam and the way he coaches,” Dr. Alsup said. “We’re very excited and fortunate to get Sam, and he’s ready to get to work.”

The basketball Rebels will open their first season under Tarlton in November. The softball Rebelettes will make their debut with Kennedy at the helm in March 2022.